Here are some pictures and descriptions of what members have been up to in the last six months or so during the Covid-19 pandemic.

Many will know I retired and dismantled Portpatrick Town at the end of last year.  It needed substantial overhaul.   It took me a very long time to decide how to replace it with another steam/diesel era layout.  Eventually I settled on a ‘might have been’ assuming the Black Isle line to Fortrose had been extended to Cromarty.  I them settled on a plan, but by then we had been in lockdown and my first choice baseboard supplier has orders for many months.  Eventually I settle on white Rose.  Ordered the boards end of July and they came in a week.  Track was down wired and operational before end of Sept.  Such is the benefit of not much socialising and doing church mainly by Zoom.  Scenic work is well under way and it will be ready for show next year.  Building it has been far easier than recent layouts as a result of the neurosurgery stopping the tremor in my right hand.  The track plan is attached.  The main fiddle yard actually has 5 sidings.  It will handle up to a 5 coach plus 460.  I can run it as fully steam up to fully green diesel.

CROMARTY – A 50s/60s N gauge Terminus on the Black Isle

Many schemes were thought up for Railways on the Black Isle, north of Inverness.  A branch was built from Muir of Ord to Fortrose.  This layout assumes that it was extended, as some tried to do, to the fishing and holiday resort of Cromarty.  It is assumed that while the Highland/LMS dominated, the GNoSR/LNER obtained the right to run trains from Aberdeen and other of their destinations.  Tourist and fish traffic initially developed though such a line would have succumbed to the Axe by the mid/later 60s.

We will often start the day using steam locos but in the afternoon we may decide that motive power becomes diesel, with a class 120 DMU, Class 20, 24, 26 and 27 locos featuring.  And the odd interloper in both eras.  Apart from trains to Muir of Ord to connect with Kyle and Far North Line services, through trains are run from Inverness, Aberdeen and even Perth.  On summer Saturdays there may be a train from Glasgow or Edinburgh.

Baseboards are plywood kits from White Rose.  Track is Peco code 55.  This is the first layout I have built since neurosurgery to correct the Tremor in my right hand.  I have used a number of kit buildings from Metcalfe.

"The Road to Listowel", by Rudi Newman

Using a mix of traditional techniques and modern 3D-printing, this is a fully working micro-layout in 1:148 N Scale depicting a level crossing just outside Listowel on the famous Listowel & Ballybunion monorail.  Designed with a fiddle yard at each end and a magnet-based runner system for propulsion, several trains have been built for the layout including several variations (depicting modifications over the years) of the line’s Hunslet 0-3-0 tender engines.  The 3D parts are now available via Newman Miniatures, and a video of the layout in operation can be found at https://www.youtube.com/watch?v=W2qugva47no

The Llyn Cenydd Railway is a fictional narrow gauge lakeside railway inspired by a visit to the Narrow Gauge railways of North Wales. It is loosely based on features of the Llanberis Lake Railway which runs alongside Lake Padan. The layout is named after the sixth century Welsh saint of that name, coincidentally the translation of the owner’s name.

The Llanberis Railway runs alongside Lake Padam for a distance of 2 miles (3.2km), which in 00 scale is about 140ft (42m), a little impractical to model. However, it does have a turn-round loop at the end, and a run-round loop in the middle, just like the model!

The layout is manually controlled and split into five sections to enable two trains to run and pass each other in the loop. The points are motorised.

The baseboard is made up of 80mm ply stepped into two levels. The track is Peco 009 code 75 main line and the operation is via two Gaugemaster controllers which can be switched between sections.

The back scenery is constructed from polystyrene and plaster cloth painted and covered with various scatters. The trees are Woodland Scenics kits and the rocks are broken up bits of cork.

Pending the release of Bachmann’s quarry locomotives at some future unspecified date, there will be a converted Thomas series Rheneas pulling the train.

Unfortunately there are some tweaks required to improve the operation!

“Moos” will be in the November Continental Modeller according to Andrew Burnham ( editor).

I could have built another terminus station, but years ago I owned a rural through station with a narrow-gauge feeder line and had always had a yen to go back to that concept.

I had a copy of the book published by the Austrian Railways group in the U.K.    “Austrian Model Railways Track Plans” which proved useful in my planning.

In it I was intrigued by a plan for a closed junction station called “Pirawarth” in the Weinviertel in lower Austria, which would become the basis for “Moos”. This was to be a secondary electrified route running between Horn to the east across to Zwettl in the west; with the narrow-gauge running down to Krumau am Kamp and a diesel branch to Huf. Whilst the station plan itself was fine and I could fit it into the footprint of the new layout. I felt that it needed to be slightly tweaked in order to add a narrow-gauge feeder line. Looking through the book I espied the pages covering “Klaus” (CM December 2017) on the Pyhrnbahn and thought there was a distinct possibility of marrying the two together in some way. I had in stock a fair bit of the Tillig narrow gauge and dual gauge trackwork and so a germ of an idea started to dawn.

The places mentioned in the article are real places. Moos does exist as a place but not where I have modelled the layout and it did not have a railway: The towns of Horn + Zwettl do have stations; but they are not connected directly. Krumau

exists but never had a railway and Huf is a figment of my imagination (use the dictionary for the translation for the meaning).

The layout consists of six 3’x 2’ boards plus two 1’x2’ boards .Each board being constructed of seasoned 2”x1” timber with ply tops for the trackwork, each joined together by 2 pattern makers dowels plus two sets of bolts washers and wing nuts. I have also re-used the same sawhorses (available from a well-known DIY store) which I used for Klapping and added several extra single legs for stability as the base boards are now wider that the sawhorses.

The track used is Peco code 75 using electro-frog points plus  Tillig dual gauge and narrow gauge trackwork – the points on the narrow gauge are from the Peco range as they appeared to function better than their Tillig counterparts -which have no springs . I again used the Woodland Scenics underlay to deaden the rumble. The Peco track was all brush painted with Railmatch paint. The Tillig track comes in a burnished colour which really requires little attention. All the trackwork was ballasted using Green Scene N gauge ballast of various colours using their ballasting tool. The points were done with a small spoon a brush and a steady hand. The layout was then sprayed with a PVA water and washing up mix.  (I used a syringe around most of the point-work).

This is from the Sommerfeldt range, however this time due to the location and the baseboard back-scene heights, I have opted for the smaller metal post masts with a few of their smallest tower masts in appropriate positions. The masts and running wires were all primed with car etched primer and then sprayed with a coating of Halfords grey primer.

The control is analogue. Once again I have used the plastic boxes available from Hobbycraft, though this time I have had to use two because of the number of points and switches and the fact that there are three standard gauge and one narrow gauge fiddle yards.

Both boxes have CDU’s mounted in them for the Peco point motors and plugs for my trusted KPC (non-feed-back) controllers. The Tillig points have their own transformer as they use a Fulgarex style of motor and cannot be operated on the same transformer as the Peco ones.

I could have gone down the DCC route but as I have said before having so much stock it would have proven too costly and apart from anything if I need an operator at short notice its far simpler to teach someone with a DC handset.

Back-scenes for me have always been a bit of an issue – there are some beautiful commercially available ones, however none appeared to be suitable for the area I was modelling- also in general I thought they were overpriced for the amount I was going to require for the area behind the bridges. The other point was that the back-scenes themselves would need to be removable for when the layout was in transit in the car. When it came to the back-scenes I decided to paint my own. I have in my possession 3 books published within the Eisenbahn Kurier range from Eduard Sabmann concerning OBB railways. These are all colour photos which cover steam diesel and electric locos and rolling stock in various settings across Austria and were especially useful for inspiration.

I have stated previously that the whole idea is to introduce the general public to the railways of Austria and to have fun whilst doing it.

I have a wide range of rolling stock available to me for the layout and so I can run it in various eras. The branch being worked by the ubiquitous 2 car Triebwagen and the four-wheel green coaches behind one of the steam locos and a 5070 single car unit. The main line has mix of green coaches of various types plus Schlieren orange and cream coaches plus the more modern 4020 EMU.

My preference is the end of steam with diesel and electric starting to take over. I have made some careful acquisitions and have a range of locomotives at my disposal of all 3 genres.

The narrow gauge has a variety of stock sourced from many companies – the Krumau Eisenbahn   has so far failed to repaint its stock into its home colours of dark green.

Not a lot done, but here are some buildings ready. 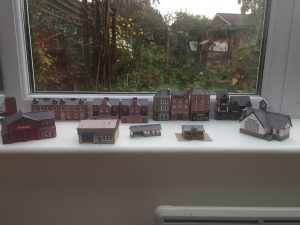