We have obtained a part-built ’00’ gauge layout that we are completing in DC format (conventional system). This involves track laying, including remote control points, electrics and adding scenics. Some of our members are trying out new skills to work on the layout and we would welcome any new member who would like to join them. The target is to have some trains running for our Exhibition in May 2022.

Here is a picture: – 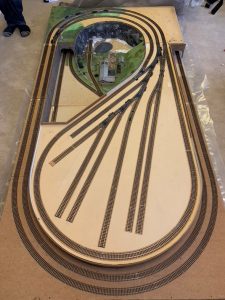 The layout was developed by the club to take the place of ‘Walmcompton’ which had passed it’s effective life. The initial planning took place in 2000 and shown in a very basic form at the club’s exhibition in 2002 and the first train to run was set off by the widow of Tony Frey, a long standing member of the club hence the name. Since that day it has been shown at a number of venues and because the layout is constantly being updated (see below for future plans) we hope it will be invited to future exhibitions for some time to come.

The actual size of the layout is 16′ by 3’3″ separating into four sections enabling it to be transported in members’ cars. It consists of four tracks laid as a tail chaser, the outer two being slow and the inner two being for the normal fast trains. The station is wired so that trains on the fast line can be brought into the platforms, both to serve the passengers and to allow other trains to overtake. There is also a goods yard where goods trains can call (see below in future plans). Because the members interests are so varied the actual location and era has been deliberately left vague and the layout is now being run as steam in the morning and modern image in the afternoon at exhibitions.

A fully automated signalling system using three aspect lights is now fully operational. Passing units activate a sensor so changing each light within that track and in certain circumstances other tracks.

The number of trains that can be run at any one time is fifteen and we like to have six members in attendance at exhibitions.

Allanbrae does not appear on any map.  A Scottish sounding name emanating in large part from two operators who have provided invaluable assistance in recent years, it is probably located on the banks of Loch Lomond, or thereabouts.  It is still operated by diesel traction some years after privatisation.  Once a 5 platform terminus with a complex track arrangement it has been simplified considerably over the years, with the main approach being singled; only 3 platforms remain though the old Platform 5 is now a Royal Mail depot.  The original  platform 1 is now part of the car park and bus/taxi stands.

Services, primarily to Glasgow, Edinburgh and Stirling/Perth are operated by a mix of 156, 158 and 170 DMUs and sometimes a Voyager  to Manchester.  There is a daily portion of the Caledonian Sleeper.  Mail trains serve the depot.  This and the sleeper are hauled by Class 67s.  Liveries cover a mix of years.  Beyond the road bridge the kickback leads to a Traction depot for locos and an unspecified freight facility.  Depending on my mood this might be an oil depot, a paper mill, aluminium works or Whisky distillery.  Or a mix of these, so a Class 66 will also appear from time to time along with the 08 station shunter.

This 009 gauge diorama, 70cm x 60cm, is built on a 6mm pine wood base. Originally it was just an N gauge test track but to make it more interesting and to develop my scenic modelling skills I added scenery.

The Loco featured is a Backwoods Miniatures kit of “Exe” a Manning Wardle 2-6-2T that ran on the Lynton & Barnstaple Railway.

The coaches are from Parkside Dundas of Festiniog & Blaenau, & Welsh Highland Railway and there are some open toaster rack coaches from the OO9 Society.

Scenery is poly styrene covered with poly filler and the rock faces are made with Woodland Scenic’s hydrocal and several of their rock moulds. The rocks were then coloured with their water based pigments.

The trees are Woodland Scenics kits.

In its present form Tansey Bank represents the main terminal station and engine shed on a preserved ex-industrial railway somewhere around Warwickshire in the early 1960s.

All of the rolling stock operating on the layout is either kit-built or a ready-to-run item. The stock has been fitted with Greenwich couplings which have proved reliable and given automatic uncoupling on a layout that is hopefully free from “the hand of God”. Every part of the layout has been weathered with acrylic paint, brown ink and matt varnish to create a uniform work-stained appearance.

Tansey Bank was featured in the October 2013 edition of Hornby Magazine.

If you have any questions about anything you see on the layout don’t hesitate to ask – things are never too busy down at Tansey Bank to stop and chat.

Hobbs Row Halt is a classic English country micro-layout, complete with thatched cottage and “chocolate box” garden. It started out as a simple circular piece of track on an MDF “Wobble Board”, obtained from the local charity shop that I used for running in new locos. But after placing a couple of surplus buildings from my Tansey Bank layout inside the loop to check on coach clearances, I realised that a bit of scenery would not go amiss, and Hobbs Row Halt is the end result. The cottage is from the Bachmann Pendon Little Chapel Cottage resin model range and the magnificent trees are from the range of ready to plant foliage, now marketed by Debris of War. Hobbs Row Halt was featured in the August 2013 edition of Hornby Magazine.

The idea with Silverbury was to create a modern image layout of the Great Central Railway if it had been made 4 tracks into London after the 1st world war, and if Beeching had not closed the line, but  instead reduced it to two tracks.

Silverbury is a combination of Silverstone and Aylesbury a “WHAT MIGHT HAVE BEEN” layout.

The period modelled is BR Blue to the present day, and to achieve this we are producing interchangeable buildings and industries which can be dropped into place.

Silverbury is placed at the edge of both Network South East (BR blue) and Chiltern Railways (Network Rail) so many trains would terminate at this point. It is also a mainline for long distance and Cross Country Passenger, and through freight trains. This is to create plenty of interest for both operators and viewers.

It has been built in a modular construction which has allowed a more flexible and versatile approach with each base board being 4’ x 2’6” – (1.22m x .76m) and there are two half length boards.

The layout can be put together in FOUR basic formats.

The hidden yards are two symmetrically opposite ends.

We have found in practice that the additional time taken in every detail of construction when building the layout over many years has ensured that it runs reliably. Even after many months in storage it has always worked near perfectly every time. The track work and electronics are standing up well to the less than perfect environment of our Clubroom.

We have decided to use truncated pyramidal box legs (towers) for this layout that are independent and NOT LAYOUT SPECIFIC, this is so they can be re-used for other layouts for many years to come. They also stack one on top of the other for ease of storage and transportation. Because the base boards sit on top of towers, it means the locating dowels and bolts only have to align and hold the boards together.

For transportation, storage and maintenance we fit end boards and 40mm x 20mm timber stretchers across the top which creates a box to protect them and because we’re using tower legs, it also means they can be used to support the boards when they are turned UPSIDE DOWN, without fear of damage to the scenery when we need to work on the under side and gives us easy access for upgrading and maintenance.

Erection and dismantling of the layout is easy achieved by the small team even when dealing with the full round and round version (17 baseboards).

We use MERG’s Cbus system to control and sense the points and we’re able to set routes i.e. into and out of the 11 road fiddle yards with one push button switch. The layout can also be changed from a standard DC control to DCC at the flick of a switch.

We’re also using MERG’s DCC equipment and JMRI to operate the locomotives, several of which have sound units.

Construction of Luffield Junction was started by the now disbanded Bushey & District MRS. It was named Frome and was a fictitious station
on the Somerset & Dorset Line.
The layout was purchased by SWHMRS from an ex-member of the Bushey club in 2014. Only part of the layout was operational so we are now undertaking a major redesign project which will facilitate the varying eras and operating companies of members’ rolling stock.
This fictional line is set in the South Midlands during the time era from just after the Second World War to the late 1950’s. Thus all members will be able to run their stock on the layout without feeling out of place.
Luffield Junction lies about midway along the line, on the Northants/Bucks border, where two lines converge from the North and North West. LMS and LNER have running rights along the whole length of the line, while GWR and Southern run North as far as Luffield.

The layout is under the process of another change – from the originally planned ‘circle’ to a straight through layout of six boards. This works better for assembly in the clubroom space to allow use by members for running their stock.

Part of as large wagon manufacturing and repair works set in Yorkshire in the late 1990s.  Locos and stock represent the sectorised and privatised liveries leading up to that time.  The layout has track inside the wagon works buildings (for wagon exchange) plus a fiddle yard link to the national rail network. Health and safety is a priority with warning lights and sirens for wagon movements onto and out of buildings.

The layout is built on a recycled baseboard frame of 50mm x 25m timber forming a 1.2m x 0.3m board with a Sundeala top.  Track is EM flexitrack with handmade points (this is my first venture into track construction and EM gauge).  Point control is wire in tube with micro switches for live frog polarity switching. The wagon works and bridges are scratchbuilt and the half relief buildings are from the Metcalfe range heavily modified. Figures and details are from a variety of sources including Matchbox, EFE, Corgi, Preiser, Merit etc.

Locos and stock are Hornby, Bachmann and Lima with added details and weathering, re wheeled to EM gauge and couplings changed to Kaydee. Warning lights and sirens are from Maplin kits and street lights are Veissmann. Control is normally from an old H&M Clipper for DC operation, but the layout has been run as DCC with all track sections switched on and using a suitable controller and locos.